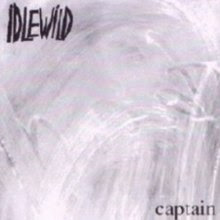 I've come to Idlewild via a backwards route. My in was via the folk albums of Roddy Woomble, both his solo stuff and his album with Kris Drever and John McCusker

More recently, particulalry in the last year or so, I have been gradually acquiring  the earlier recordings of Idlewild, the band he led, via charity shops.

My most recent acquisition is their first Captain from 1998 and it is here that the condundrum kicks in.It has 6 tracks and is only 19 minutes and 47 seconds long. To me that means it qualifies as an EP but Wiki say it is more commonly known is a mini-album. Is there such a thing? If so it is not included within my cataologuing system. Had I got the Japanese version which contains another 4 songs making it a whopping 24 minutes and 54 seconds long this may have been less of an issue.

The above is pretty much semantics. As long as the music is good it pretty  doesn't much  matter. I'm pleased to report that it does. It is a splendid racket as as far removed from his acoustic folk records as you could imagine.

I'm still filing it as an EP although it will be shelved alongside the CD albums as opposed to the CD singles.

If you log on one day soon and there is nothing here it is because I have thrown the laptop out the window.It is doing my head in!