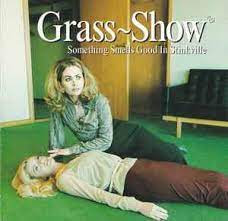 Grass - Show may not necessarily be the best band to grace Swedefest but they do win top prize for album name and cover.

Grass - Show were a Brit-pop inspired indie band from Sweden who were active from 1995-1997. Something Smells Good in Stinksville was their only album in the UK and was released in 1997 on the Food label.

The personnel were Peter Ågren -vocals and keyboards, Erik Kinell - vocals,guitars and bass, the non-Swedish sounding Andrew Dry on bass, Robert Gehring on guitar and background vocals and Mattias Moberg on drums.

There were three singles on the album and you are getting two of them. I shall also spare you their cover of the Ace of Bass song All That She Wants.

The album starts of promisingly but I was struggling a bit towards the end. Another listen is required to determine whether or not it is a keeper.

Grass - Show - Out of the Void