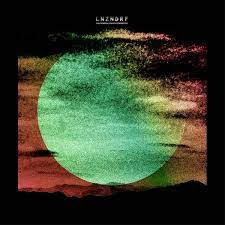 LNZNDRF seem to be yet another band who find the use of vowels disposable or should that read yt nthr bnd wh fnd th s f vwls dspsble?

It seems that they are something of a supergroup given that they consist of the trio Brian and Scott Devendorf of the National and Benjamin Lanz of Beirut.The band title begins to make slightly more sense now - Lanz and Devendorf but without those pesky vowels.

Pitchfork seem to like it up to a point giving it a score of 6.1 and describe it as paying homage to the headier aspects of the 4AD catalogue with an enjoyable yet uneven debut.

They seem to enjoy the music but not necessarily the vocals and to a certain extent I can see where they are coming from. In addition they reference Conny Plank's studio in Cologne, with the obligatory nod to Can, and Spacemen 3. I don't know enough about either to pass judgement. Maybe others do?

This is the  self-titled debut album by the band from 2016 on 4AD and they have followed it up with a 12 inch single, an EP and a second album imaginatively titled II in 2021

I'm not sure that this one is for me although it is perfectly pleasant background music.I just about managed to listen to it all the way through. I suspect that it will not be a keeper

LNZNDRF - Beneath the Black Sea