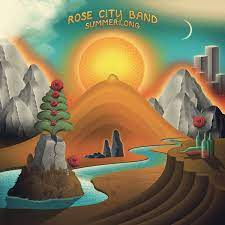 When John posted a song by the Flying Mojito Bros the other day I offered up Rose City Band as another act who produce some interesting and excellent psychedelic Americana with a Laurel Canyon twist.
The band is a side project of  of Ripley Johnson of Wooden Shjips and  Moon Duo fame. In a short but prolific period he/they released three albums all of which are on the Thrill Jockey label namely Rose City Band (2019)., Summerlong (2020) and Earth Trip (2021).

They are all excellent but Summerlong remains my favourite, particularly at this time of the year.Ok, so the weather may have returned to normal but it still hits the spot.

The Guardian in a review article state that In an increasingly fraught world, it's an unashamedly sunny sound. It makes for a gorgeous record in which to lose yourself for 40 minutes.

Folk Radio states that  with Summerlong he has proved that even in the dark days there is always hope for rebirth close at hand.

A true beacon of sunshine.

I'm not sure if Ripley plans anything else from this offshoot. I think that stopping at the three albums is just about right but am willing to be proved wrong.