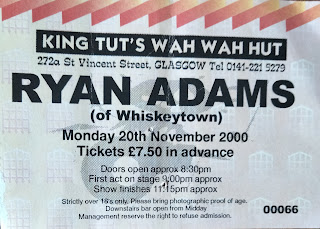 The penultimate post in this series and it presents me with a moral dilemma, one that I have touched on before

Ryan Adams  has been accused of  a pattern of manipulative behaviour in which he dangled career opportunities while simultaneously pursuing female artists for sex.  here

The accusers include a girl who was 14 at the time and the singer Phoebe Bridgers. Adams has always protested his innocence but has recently apologised for "mistreating" women.
As an artist he has always been up himself with an extremely large ego and frequent displays of brattish behaviour. I'm inclined to believe the women although  it appears that he is now contrite possibly because his career and reputation are on the line.
All the above means that I won't be featuring Ryan Adams today which is a shame as it was a terrific concert. I went from seeing him in King Tuts with its capacity of around 300 to seeing him moving to bigger venues such as the QMU, The Garage and the the Barrowlands. The last time I saw him was at the Glasgow Academy.I walked out at the interval as he was completely stoned and spent most of the concert wittering inanely as opposed to singing..
I still have a few of his albums. The first three are pretty good with the debut Heartbreaker being the best. I haven't played them since his behaviour was called out but I haven't got rid of them either. I see he is back recording now.
The of Whiskeytown bit of the ticket title is important as it means that I can feature stuff by the band he was previously in. It would be unfair on the other members to boycott them because of his behaviour. A bit like Morrissey and The Smiths
A track each then from their three albums  Faithless Street (1995), Strangers Almanac (1997) and Pneumonia (2001). It is worth noting that he was still a member of Whiskeytown as well as a solo artist when this concert took place.
The final instalment of this series next week
Whiskeytown - Drank Like a River
Whiskeytown - Excuse Me, While I Break My Own Heart Tonight
Whiskeytown - Jacksonville Skyline
Posted by Charity Chic at 08:00