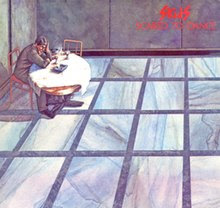 Scared to Dance was  the debut album from Dunfermline's finest band Skids which was first released in February 1979 on the Virgin label.There was a  re-release in 2005 taking the number of tracks up from 12 to 20.

Vocals and lyrics by Richard Jobson, guitar and musical arrangements by the late Stuart Adamson, Billy Simpson on bass and Tom Kellichan on drums. Talking of lyrics it is the first time that I have ever seen the lyrics of Into the Valley which are somewhat different to what I thought. It remains the song that Dunfermline Athletic FC enter the field to.

I am always reluctant to trust my USB turntable with new vinyl so here is something I prepared earlier.

Skids -Into the Valley