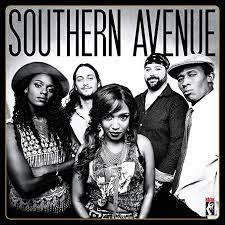 George very kindly shared  a recent Bandcamp discovery with me.
Southern Avenue are a five piece blues'n' soul band from Memphis. This, their self-titled debut album from 2017, is on the Stax label and is the first of three albums to date.
I asked George whether he wanted to write something about them but he is still a bit traumatised from his Household Clearance  series so it has fallen to me to do the honours
They are named after a street in Memphis which runs from the city limits to Soulsville the original home of Stax. The band were founded by Israeli blues guitarist  Ori Naftaly and includes the Jackson sisters Tierinni on lead vocals and Tykira on drums.
Soul Tracks proclaim that the album   is a breath of fresh air with its own unique blend of gospel- tinged R&B vocals, roots/blues-based guitar work and soul-inspired songwriting.
Whereas it may have been unique at the time to me there are clear comparisons to be made with the Alabama Shakes and the Last Internationale both of whom came along a few years later.
A good find George
Southern Avenue - Don't Give Up
Southern Avenue -No Time to Lose
Posted by Charity Chic at 08:00