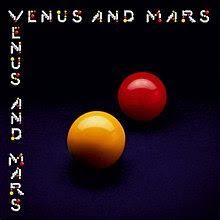 There is a pop up shop in Whithorn which is open a couple of times a week.

It is run by an elderly couple and sells a variety of things including the ladies art work and 60s and 70s LPs. Chatting to the man he said it started out as his collection but it is now supplemented by job lots from auctions, etc

I am not particularly a fan of the Beatles or the music of any of their individual members. However, I did have Band on the Run and Venus and Mars by Wings on pre-recorded cassette when I was in my early teens.

As Venus and Mars was only a couple of quid I felt obliged to buy it for nostalgic reasons. When I looked at the album it appeared a bit damaged and I mentioned this to the owner. On closer inspection the vinyl was by the Statler Brothers which might well have been better had it been in reasonable condition.

However he did have another copy complete with posters etc so I took it. There are superficial scratches on side one which my turntable can cope with but which my USB turntable does not like so here are a couple from side two.

Oh, and for older UK listeners I couldn't resist throwing in the Crossroads Theme.

Wings - Listen to What the Man Said