Seen at King Tuts - The Jayhawks 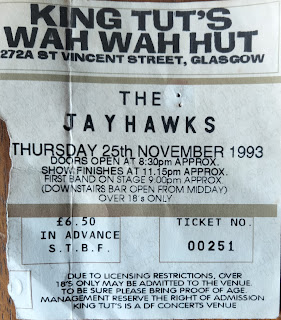 The final instalment in this series which started exactly one year ago and I would argue that it may well be the best.

Some of you may have heard/read this  story before but I think that it is worth repeating:

I was there with Gogs, Donno and Donno's girlfriend (now his ex wife).
We were in an advanced state of excitement and many beers were consumed.
Those of you familiar with King Tuts will know it is mainly standing with a few seats at the back.
As you would expect we were right down the front. Donnos' girlfriend wanted to go up the back, we declined to accompany her and she went home in the huff.
After a truly fabulous concert and far too many beers we resolved that we would go and see  them the following night wherever they were playing.
I went back to Donno's flat and crashed out.
The next morning we woke with sore heads and still hungover  decided to find out where they were playing. This took some doing as it was in the days before mobile phones and t'internet.
We found out that they were playing in Whelans that night - in Dublin! and decided to go.
Gogs had gone off to work so we phoned citing a family emergency and that he was required to return home immediately.
We then set off for Stranraer to catch the ferry to Larne and drove down to Dublin arriving about 7.30 pm. We checked into a hotel and then headed for Whelans

We saw another terrific concert. At one stage after they had finished we cornered Gary Louris and Marc Perlman to regale them of our adventures. They a) were mightily impressed or  b) thought we were crazy (delete where appropriate).
We staggered out of Whelans and bumped into some folk going to see Maria McKee and decided to join them making it 3 gigs in 2 nights.
We stayed on Saturday and took it relatively easy going to a couple of pubs one of which featured a bog standard Steely Dan tribute band who may or may not have been called Reeling in the Years.

Remember Donno's girlfriend ? She hadn't seen him since storming out of King Tuts on Thursday and was expecting him for Sunday dinner. She got a shock to find out he was in Dublin.
Fast forward a few years and the Jayhawks are playing in the Garage in Glasgow  two days before their wedding. Cue one very nervous wife to be!

We did manage to chat with Sharleen Spiteri at the Garage as she had joined the band to sing Blue. Memorable as that was it doesn't compare to the first time. Sadly there was nothing out of the ordinary to report any other time I saw them.

Today's music comes from 1992's Hollywood Town Hall as that was their album out at the time.It has featured here a few times before so today I will concentrate on tracks that I think I haven't posted before

I have seen a few more acts at Tuts but haven't retained the tickets. A year seems long enough!

The Jayhawks - Waiting for the Sun