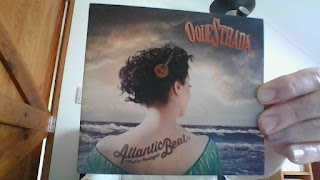 As I think I mentioned in my previous post, I’m going to be more selective in the music posted. So I pick up a cd single by Captain Hollywood called Love and Pain. Four painful listening experiences, thumping beat, the words love and pain repeated seemingly ad infinitum with a few yeah-ehs. So I deliberately selected a Depeche Mode single next: there’s a couple of their albums here, a couple of singles and I thought  I’d be safe with this, the cd single It’s Called A Heart,  so three versions of that plus a couple of something called Fly On The Windscreen. It’s filed under Tedious and Gloomy on the ever-growing birdscare pile.

But I find something that could be portuguese, although the title doesn’t mean anything as far as I can make out it is called “OqueStrada”. Maybe Atlantic Beat (from the spine). So in it goes, and I plough through the notes, which as far as I can make out start with “ a disc with much iodine and atlantic breeze which repositions Portugal not as a door to the depths of Europe but as an entrance”. That doesn’t sound right. And it possibly isn’t, it could be “a door at the back of Europe”, maybe “the back door to Europe”, but coming from the atlantic that would be a front door. I’m a bit confused. The blurb also offers “a verandah with the best view of the world”. It’s an album of what I can most positively describe as quirky acoustic songs, and as I listen to it I am looking forward to the one called “Your eyes are swallows”. The lyrics are included, but you surely have had enough of bad translations by now, and don’t need to read about eyes being two pools that I want to see cry water from the hills to the sea. I think. Here is said song:

That’s more fado than quirky. So here’s a quirky one

There’s only so much quirk these ears can take. By the way, I’ve never heard a portuguese person ask for a cafe solo, I thought that was spanish. Round these parts it’s “um café”, or “um cafezinho” for what you lot might think of as an espresso, or “um abatanado, faz favor”, my preference, which is a cup (of coffee)  of the size you lot might associate with tea.

My eyes sweep over the remaining pile and I quake and tremble at the thought of listening to two cds of Celtic Moods. And that’s not quaking and trembling with excitement, let me tell you that, and tell you no more. So I’m off to Elsinha’s for um abatanado, faz favor Elsa.

These two tracks could give Ernie Goggins a run for his money.