Albums on both CD and Vinyl - If There Was a Way 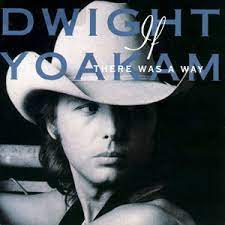 After two bona fida classics I'm going for something slightly more obscure although I would argue that If There Was a Way by Dwight Yoakam is also a classic album.

In the mid 90s I was hugely into Americana and Dwight Yoakam in particular. I have had his first four albums on vinyl for many years.

Then a few years ago I noticed one of those 5 CD Original Album Series in Missing Records at a reasonable price which include the first four plus the fifth one This Time which I had on CD. Although I had them all it was a no brainer and it was duly purchased.

For the record the albums are :

I could have chosen any of the first four to feature today.I've gone for the fourth one If There Was a Way which like the others is on the Reprise label. It could just as easily been any of the the other although Guitars, Cadillacs and Buenos Noches have appeared here before.Who knows, the other three  may well feature later in this series.

After the first four the quality of the albums began to decline - gradually at first and then very rapidly.

I would argue that the first five are all you really need. Indeed I did argue this very point when I did an ICA over at JC's place

Dwight Yoakam - The Distance Between You and Me

Dwight Yoakam - The Heart That You Own