It Took a Lost Weekend in a Hotel in Amsterdam 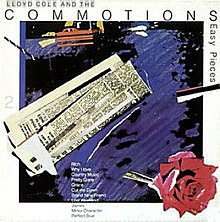 When I featured Rattleskins  Rattlesnakes on the Vinyl and CD series the other week I confessed that I had also not featured anything  before from Easy Pieces the second album by Lloyd Cole & the Commotions from 1985 on Polydor.

There seemed to be a bit of love for it out there for it particularly from regular Friday night correspondent Spence.

I had said that I would get round to featuring it sooner rather than later and given that I am a man of my word here it is.

It continues in the same rich vein of form as Rattlesnakes and whereas it is maybe not quite as good as its predecessor (let's face it very few albums are) it still throws up some absolute bangers.

I dusted it down for a listen or rather gave it a good clean as it has been a while and thoroughly enjoyed the experience.

Did you know that Lloyd was from Buxton and grew up in Chapel-en-le-Frifth? He now stays in Easthampton, Massachusetts.

Lloyd Cole & the Commotions - Why I Love Country Music