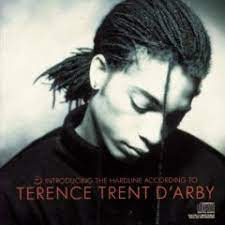 Along with just about everyone else on the planet I bought Introducing the Hardline According to Terence Trent D'Arby when it was released by Columbia in July 1987.
I played it a fair bit at the time but it is one of those albums which you rarely dig out for a spin years later.
Then in 2016 in a charity shop for £1.49 I picked up a 3 CD box set which included this album along with his third album Symphony or Damn (1993) and Vibrator (1995). By the time these were released he had become rather strange and was no longer part of the mainstream.
I featured both here and here at the time and I don't think that I have listened to them since. Until now I have probably not listened to Hardline since then either.
There is no denying that he has a great voice but was probably a victim of over-exposure when the album was released with the associated hype.
It's been filed back on the shelves and will probably be dusted down again in another few years.
Terence Trent D'Arby - If You Let Me Stay
Terence Trent D'Arby -Who's Loving You
Posted by Charity Chic at 08:00