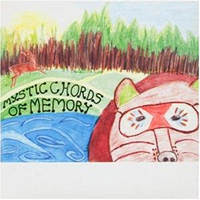 Mystic Chords of Memory  are an American alternative rock duo consisting of Christopher Gunst of Beechwood Sparks and Jen Cohen of the Aisler Set.

They have released two albums with this self-titled one from 2004 on Rough Trade being the firsr.

As our American readers will surely know (I'm looking at you Brian) the bands name is a phrase which appears in the last paragraph of Abraham Lincoln's first inaugural address. Every day is a schoolday.

Amanda Petrusich from Pitchfork appears to like it  giving a score of  7.7/10 and saying that it is full of soft melodies,sweet vocals and scratchy DIY production.I'm not so sure about the first two but she is spot on with the last

She goes on  the band's sound is just as archaic as a truly striking political speech: Gunst and Cohen blend tinkling bells, melodica, harp, keyboards, bits of samples, tinny drums, and strummy guitars, presenting a vaguely contemporary update on the British folk phenomenon of the late 1960s-- albeit with more blips.

I'm afraid that this one does nothing for me (other than mildly irritating me)and it is definitely not a keeper.I can see why The Swede was happy to part with it!

One more new act to go then a couple of albums from bands who have previously featured in this series.

Mystic Chords of Memory - Sure, Bert