Albums on both CD and Vinyl - Grievous Angel 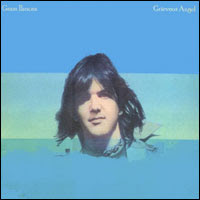 We are back to absolute classics this week with Grievous Angel the second and final album released by Gram Parsons back in 1974 on the Reprise label.It was released posthumously after his death in September 1973 at the age of 26  following a drug and alcohol overdose

I was totally oblivious to him then and it was not until the late 80s when a superb Radio 2 show by Hank Wangford alerted me to his talents and to other artists such as the Louvin Brothers and Lefty Frizzell. How I wish that I had a copy of that show.

Obviously it was imperative that I track down some of his music and this LP was duly purchased. Not too long afterwards I bought the 1990 CD  again on Reprise which contained both his first album GP and this one. Question to self- "how on earth have you not got GP on vinyl?

He is joined by such luminaries as Glen D Harden, James Burton, Al Perkins,Bernie Leadon, Linda Ronstandt and of course his soulmate the wonderful Emmylou Harris.

Gram described his songs as Cosmic American Music and that works for me. There are only 9 tracks on the album which only lasts for 36 minutes and 14 seconds. Nevertheless it is absolutely essential.

You will not hear better songs today.Absolute perfection.