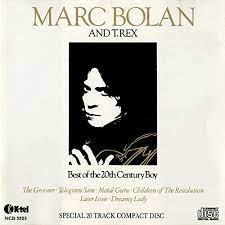 My final purchase from the Whithorn pop up shop was Best of 20th Century Boy a K-Tel compilation from 1985 attributed to Marc Bolan and T.Rex.
I already have Solid Gold another T.Rex compilation but it was bought in the knowledge that although there would be doublers there would be enough new ones given this a 28 track double album compared to the 16 tracks of Solid Gold.
One slight problem however as when I got it home I found that the second album in the sleeve was not the one on the cover but  that the LP in the sleeve was a  Spanish copy of the bands debut album T.Rex from 1971.
No biggie I thought, it will be interesting to hear it. Unfortunately it is in a very poor condition so I haven't been able to give it a proper listen.
Oh well never mind. As they say:
Get it On
Bang a Gong
Get it On
T.Rex - Get it On