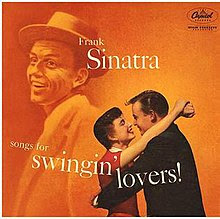 I used to have a copy of the Frank Sinatra classic Songs for Swingin' Lovers but it disappeared somehow, somewhere along the way.

Therefore I was pretty happy to pick up a copy of the 1960 re-issue of the album originally released on the Capitol label in 1956 for a couple of quid in the Whithorn pop up shop. As you would expect for an album of this age there is a bit of snap,crackle and pop. It is however in remarkably good condition for its age and any surface noise just adds to the attraction.

Widely recognised as his best album,or if not his second best after In the Wee Small Hours, this is Old Blue Eyes at his absolute prime with the musical arrangements courtesy of Nelson Riddle. It was rightly the first album ever to top the UK Album charts

Nothing more to say really. I'll let the music do the talking.

Frank Sinatra -It Happened in Monterey

Frank Sinatra -I've Got You Under My Skin