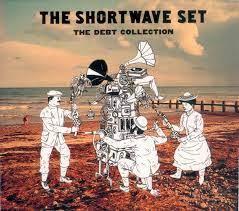 The Shortwave Set are the final band to make an appearance at Swedefest. A couple of acts who have appeared earlier however are scheduled to return.

From July 2005 on the Independiente label The Debt Collection is the first of their two albums, the other being 2008's Replica Sun Machine.

According to the sleeve notes they are making an album using the principles of  what they call Victorian Funk namely juxtapositions of sounds and images that dont quite fit together. It has to be said that they do this quite successfully as electronics clash with a strange collection of instruments, samples and vocals.

For the record the band members were Andrew Pettit,Ulrika Bjorsne and Dave Farrell. It seems that the album was critically well received at the time although this was not matched by sales. It was championed by the likes of Zane Lowe and Lauren Laverne.

This adulation was not shared by Mrs CC who could be heard screaming from the next room to turn it down.

Experimental would be the kindest description. It will not be a keeper.

The Shortwave Set - Is it Any Wonder

The Shortwave Set - Repeat to Fade

If my Blogger statistics are to be believed there was only one view for yesterday's Idlewild post - probably George given he commented. This one will do well to equal that.For the record I usually get more than one.