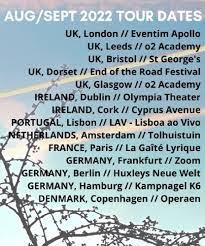 My bus back from seeing Rose City Band on Sunday night passed the Glasgow Academy which had a sign up announcing that Magnetic Fields were playing there on the following evening.

It did not have a sold out notice so out of curiosity I looked up my phone to see how much the tickets were. £131 for the cheapest ones was the answer. I think that the original prices were from £34.20.Surge pricing seems to be a thing at the moment and will probably continue to be a thing as long as people are stupid enough to pay such  ridiculous prices.

The only potentially positive thing about the impending cost of living crisis is that less and less people will be tempted and that the profits of the likes of Ticketmaster will plummet. For the record I paid £15 to see Rose City Band.

All the above of course is merely an excuse to play their song Papa was a Rodeo and in particular the cover version by Kelly Hogan which remains one of my favourite songs of all time.

The Magnetic Fields -Papa Was a Rodeo

Kelly Hogan & the Pine Valley Cosmanauts -Papa Was a Rodeo