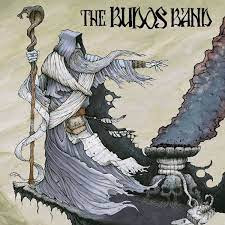 The Budos Band are the only act from Brooklyn's Daptone label that I have ever stumbled across in a charity shop. No Sharon Jones and the Dap-Kings yet sadly.

Last year in St Andrews I came away with with The Budos Band III . This year in Stranraer it was Burnt Offering their 4th album from 2014. Not to be confused with my long running series from 2017

You could be forgiven from looking at the album cover that this album was by Hawkwind or some  such nonsense. In some ways you may not be far wrong.

This is their first album not to be titled numerically.The Quitus Review reminds us that they are best known for hard-hitting afro-funk party music, dense with horns and congas..However Paste writes that Burnt Offering represents a full-on mutation rather than the previous steady evolution of Budos music. It’s 2014, and in the band’s Daptone studio, it would seem guitars are all the rage. Because for the first time, “funk rock” becomes an accurate descriptor for the still-complex musical sprawl, which now evokes the likes of Black Sabbath and Led Zeppelin right alongside Fela Kuti. Further down the article even Iron Butterfly get a mention.

I'm not sure about this one. I think I prefer hard-hitting afro-funk party music, dense with horns and congas.It may require a few more listens to determine whether it is a keeper

The Budos Band -The Sticks