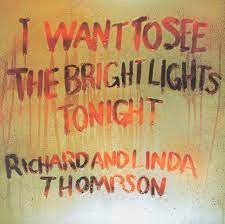 On Monday's Caitlin Cary post I mentioned that Withered and Died was the only cover song on her 2000 EP Waltzie and that I would get round to a compare and contrast in due course.
Well here it is - four days later. Two reasons - I couldn't think of anything else to post today and also if I didn't get round to posting it within a relatively short time I would probably forget. Old age, you see.
I shall post them in the order that they came into my possession.
First up is the cover by the great Louisville Americana band Freakwater. I knew that I had this on an Americana compilation but it took me ages to work out which one. It is from the excellent Cowpunks from 1996 on Vinyl Junkie - 24 trailblazing tracks.
Next we have the original by Richard and Linda Thompson from their 1984 Island album I Want to See the Bright Lights Tonight (pictured above) which is probably my favourite album of theirs.
The third offering is the only one I do not have in a physical format. It was the b-side of the 1984 single of Peace in Our Time by Elvis Costello & the Imposters. It is not on the  original album of Goodbye Cruel World although it does appear on the bonus tracks of the 1995 Rykodisc CD reissue and also on the bonus disc of the 2004 Rhino edition. Looking at the 26 tracks on that disc I may have to acquire that CD version to accompany my vinyl copy.
Last but not least the most recent one from Caitlin.
It's a tough call but I'm going for Freakwater
Freakwater - Withered and Died
Richard and Linda Thompson -Withered and Died
Elvis Costello & the Imposters - Withered and Died
Caitlin Cary - Withered and Died
Posted by Charity Chic at 08:00