A two birds with one stone scenario this week with the Charity Shop purchase of a CD of an album that I already have on vinyl. Or have I?

Maybe I should try and explain.

I picked up the above CD  of The Revolution Will Not be Televised from 1989 on the BMG label as part of their Cool Price Jazz series - nice.

This is significant as I have a vinyl album of the same name by the same artist but from 1974 and on the Flying Dutchman label. I have written about it previously here 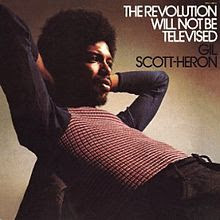 This album also includes the same disclaimer and has 11 tracks which are  the same 1 to 11 as the CD above and in the same order. A better cover though!
So can I justifiably claim to have the same album on both CD and Vinyl? I think that I will turn to the great philosopher Sir Kenneth Dalglish for the answer which clearly is Maybees Aye, Maybees Naw.
To avoid, or maybe to add to, any further controversy and confusion you are getting two of the six tracks which are exclusive to the CD.
I'm off for a lie down.
Gil Scott- Heron - When You Are Who You Are
Gil Scott-Heron - The Needle's Eye