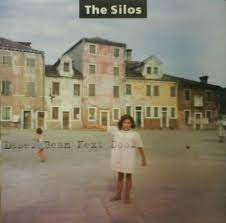 We are rapidly reaching the end of this series and for the last two post we are featuring bands whom The Swede very kindly pushed two albums in my direction
First up are the Silos who were the first band to feature with their 1990 album The Silos.Along with the Deadstring Brothers they were the only act I had heard of or had seen.
Laser Beam Next Door is their 12th album and was released in Europe at least on the great German Americana label Blue Rose in 2001.In the States I think that it was released on Checkered Past Records.
Although I was very much more into this kind of stuff in 2001 than 1990 I think that I prefer the earlier one.
Walter Salas- Humara  is the only constant following a number of band changes and the Austin Chronicle writes The group of players that have shifted in and out of the band has resulted in music that's primarily been roots-based, but with textures that have varied over the years. Salas-Humara has stripped the band down to guitar, bass, and drums, which can now be lovingly described as a garage rock power trio.
Along with Walter on vocals and guitar the other two members were Drew Glackin on bass and Konrad Meisner on drums.Sadly Drew Glackin died in 2008 aged just 44 following a cardiac arrest due to the complications of an undiagnosed thyroid condition
Exclaim.ca feels that  Laser Beam Next Door finds the Silos as a stripped-down, tight trio, still a little reminiscent of Los Lobos, but without the virtuosity of David Hidalgo. Nothing groundbreaking, but the contrast between "Sangre Y Lagrimas" and "Where Ya Been" illustrates the album's strengths: time-tested folk-rock mixed with solid, flat-out rockers.
Nothing groundbreaking indeed but I think it is only fair that I feature the two songs they highlight.
Too early for me to decide whether this one is a keeper so it is not going on the charity pile yet.

The Silos -Where Ya Been