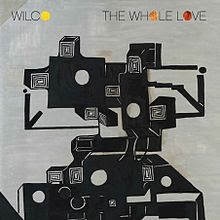 I've always been slightly wary of anything post Yankee Hotel Foxtrot by Wilco. Largely because I was a fan of the Jay Bennett era and also because they became a bit more squiggly leading to them being described as America's Radiohead. For the record that is not a good thing.
However I am gradually becoming braver in my old age and last year saw me picking up 2004's A Ghost is Born from Missing Records.
On my latest trip to Missing I became even braver picking up 2011's The Whole Love their first on their own dBpm label.
Listening to the start of the first track Art of Almost it seemed that I had made a bit of a mistake given a proliferation of electronic nonsense.Thankfully thereafter it began to calm down a bit and became rather good in places particularly with the two tracks featured before.
I recently heard their most recent record Cruel Country which is avery welcome return to their alt-Country roots
Wilco - Black Moon
Wilco - Whole Love
Posted by Charity Chic at 08:00