A Ghost is Born 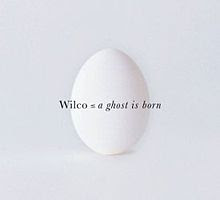 The Missing Records Haul - Wilco - A Ghost is Born
With the exception of the free download of Star Wars I don't have anything by Wilco other than their first four albums and even then the fourth Yankee Hotel Foxtrot was a fairly recent purchase to replace a burn.
When I picked up A Ghost is Born I didn't realise that it was actually their fifth (from 2004 on Nonesuch) so it is kind of good to keep the chronology going.
There is an egg on the cover which is helpful as I would describe it as like the Curate's egg - good in parts.
Some of it is pretty awful  -the  15 minute Less Thank You Think consisting primarily of  electronic drones  and  noise  intended to audibly represent the migraines that lead singer Jeff Tweedy had been suffering from while addicted to pain killers during the recording sessions for the album is migraine inducing
There are about half a dozen out there still to get and I might pick them up out of curiosity should I see them in charity shops but I've no pressing desire to collect them all.

I'm happy to stick with the Jay Bennett era and the masterpieces that are Being There and Summerteeth.