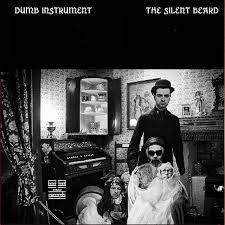 I picked up The Silent Beard a 2014 album by Ayrshire band Dumb Instrument  on Bad Tool records because the last time I bumped into a pal of mine Tom Marsden at a concert he told me that he was a member of the band and had played pedal steel of the album.

The band is lead by vocalist Tom Murray  who is also the main songwriter and  consists of Mikey Grant  on keyboards, Kieron Campbell on bass, Vanessa Smith on brass and Tom.

If they are known at all it is probably for Suffering from Scottishness. In an interview for the Scotsman Murray thinks that ‘Scottishness’ is definitely the best song about being Scottish that I could come up with, but there are other things to write about, I hope

He goes on to say I’ve just finished one about how some supermarket plums just won’t ripen, even on the windowsill,I think it’s the best song that I could come up with on that subject, and that’s all you can hope for.”. He also cites Shirley Bassey as an influence and the reason that the band has a brass section.

I think they would probably be fun to see live

NB  there is an alternative album cover which looks as if it may be a part of a female's anatomy. Think Velvet Underground Live with Lou Reed Volume 2