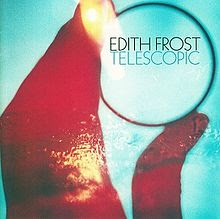 2021 Charity Shop Purchases 39 Edith Frost
The final instalment of the  Oxfam Byres Road vinyl haul is Telescopic the second album by Edith Frost from 1998 on the Drag City label.
The name rang a bell as she was a part of the Chicago alt country scene in the late 90s/ early 00s along with the Bloodshot crew and accordingly her name has popped up occassionally in dispatches.
Indeed she has actually featured her before as the very first artist in my 2017 Burnt Offerings series
She describes her music as pensive countrified psychedelia which I would say is quite accurate with perhaps the emphasis being more on psychedlica than country.
No Depression states that with a pure snowfall of distortion, bending, swirling chords, and a cool, clear voice that rises into the stratosphere like a singular, heavenly choir, Edith Frost’s second album, Telescopic, walks the line between tradition and innovation  whereas the Chicago Tribune makes reference to A mix of clean C&W hickory and piquant avant-rock fuzz.
It nearly didn't make it to the shelves as the staff had a job finding the album. I'd paid for the others when they had one last go eventually finding it as the second last album in those stored under the counter.
After a few listens I feel that I will be thanking them for finding it.
Edith Frost -Walk On The Fire
Edith Frost - Telescopic
Posted by Charity Chic at 08:00