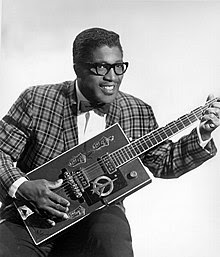 2021 Charity Shop Purchases 49 - Bo Diddley - Jungle Music
The Blues Collection (no 5)
Another Blues Collection offering for you  I'm afraid .Worry not there is only one more currently in the queue
Today it is the turn of Elias McDaniel better known to you and I as Bo Diddley. What is it with these Bluesmen and their Scottish names? Last time around McKinley and today McDaniel.
Bo Diddley played a key roll in the transition from Blues to Rock'n' Roll  with his African rhythms, the Bo Diddley beat  and the simple five-accent hambone beat (no, me neither) which according to Wiki is the cornerstone of hip hop, rock and pop music. So there you go.
Namechecked by Bob Dylan on From a Buick 6 on the great Highway 61 Revisited and also the name of a song by Tim Hardin as well as being covered by countless artists

This songs are recorded from 1955 and 1956 and are a bit patchy although the sleevenotes say that  each song has a distinct style or beat that places it in a different league from other stuff that was being played at the time.

The 59th from the Collection on the shelves.

Bo Diddley -Who Do You Love?