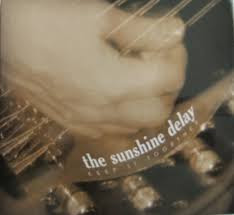 The Missing Records Haul - The Sunshine Delay - Keep it Together
The final CD in the Missing Records Haul is Keep it Together a 2011 album by Edinburgh Country Band The Sunshine Delay which I think may be self -released.
They are probably one of the acts that I've seen live the most as in the late 90's/early 00's when I was in my gig going prime any Americana act playing King Tuts were invariably supported by them, The Felsons or The Radio Sweethearts.
I have an eponymous mini CD album from 2001 and  a CD single Country Crush from 2002.
The 2011 line up is Paula McKee (vocals, acoustic guitar), David McKee (vocals,bass), Iain Barbour (guitars, lap steel) and Brendan O'Brien (drums)
A decade on the sound is maybe a bit more polished and mature than there earlier stuff and maybe slightly more mainstream.
One I shall be retaining for nostalgic purposes.
The Sunshine Delay - Slow Day For Love
The Sunshine Delay -King of the Small Town
Posted by Charity Chic at 08:00