From When Rod Was Good 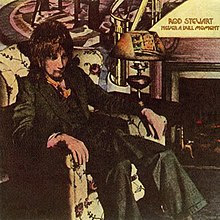 It is generally accepted , round these parts at least , that anything by Rod Stewart from the Mercury Years (1969 - 1974) is worth having and that anything else is probably best avoided. Perhaps it is because on these albums he is accompanied by  members of The Faces.
My second Whithorn acquisition was the 4th of the 5 Mercury releases 1972's Never a Dull Moment which is in really good condition considering it has a fairly complicated three way gatefold and is just a year short of  the half century.

Only  An Old Raincoat Won't Ever Let You Down and Smiler required to complete the set. I also have the compilation Sing it Again Rod  and the  excellent double CD compilation Handbags and Gladrags which both cover this period.

I'm glad to say that this one made it home unscathed.

Rod Stewart - You Wear it Well