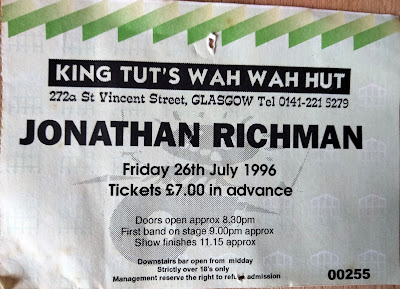 Jonathan Richman
Friday 26th July 1996         £7.00           Ticket Number 00255
It was very considerate of the legend that is Jonathan Richman to mark the occassion of my 35th birthday  by playing King Tuts that evening. It was even more special given that it was the only time I ever seen him live.
I was there with a few pals and it is safe to say that the drinks were flowing so recollections are fairly blurry. One thing  that I'm sure happened given the time of year was that That Summer Feeling featured. I know that I was Dancing in the Lesbian Bar was given an airing  as one of my pals requested it. It is a song that I first heard on the Andy Kershaw show and one which I have on minidisc somewhere.
Both these tracks feature on his fourth album I, Jonathan from 1992 on the Rounder label. There was a vinyl re-issue last year which I have still to get but intend to do so.
I seem to remember that a particular favourite of mine The Morning of Our Lives featured as an encore.As the band behind him was not the Modern Lovers I suspect that the references to Leroy and Asa and D. Sharpe were updated to reflect the band members on stage.
Jonathan Richman & the Modern Lovers - That Summer Feeling
Jonathan Richman -I Was Dancing in the Lesbian Bar
Jonathan Richman & the Modern Lovers - The Morning of Our Lives
Posted by Charity Chic at 08:00