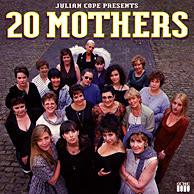 It's been a wee while since the Arch Druid has graced these pages so here is Julian Cope with a couple of songs from his 12th solo album 20 Mothers from 1995 on the Echo label.
Described by the man himself as an album of love songs and devotional songs ranging from pagan rock'n'roll through to sci-fi pop to bubblegum trance music. In short just your average Julian Cope album then.
I was minded to post something by him after a recent rummage through my ticket tin revealed that I have seen him not once but twice at Glasgow's Barrowland. He always puts on a good show. Rol's Saturday Snapshot's Triple Word Score was also an inspiration
Wheelbarrow Man an expression of pure unmitigated joy was written after Cope had spoken to his estranged brother for the first time in years.We haven't spoken since mind you.
Try, Try, Try  the only single on the album was written about his mother who has shown little, if any, interest in his career.
The album cover is a photo by Jill Furmanovsky and perhaps not surpringly is a pictue of 20 mothers. If you are wondering who they all are wonder no more
Oh and if you are wondering who is left holding the babies wonder no more 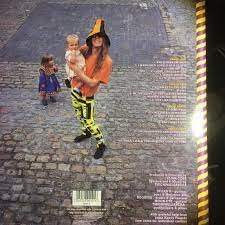