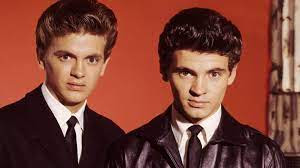 A message popped up on the Whats App group chat on Sunday morning which read Don Everly RIP.

I had to confess that I thought that he had died a few years ago. Phil Everly died in 2015 just before his 75th birthday. Don lasted a few years longer dying at his home in Nashville aged 84.

One of the best, if not the best, harmony groups The Everly Brothers were an act that took me a while to get into. I suspect that may have been because they were an act that your parents liked and that you were more likely to hear their songs on Radio 2 or Smooth FM than anywhere else and more often than not with Wake Up Little Susie

As you get older these prejudices gradually fade and I ended up acquiring a cheap and cheerful Best Of double LP in a charity shop and appreciating what talent they had. More recently here and here I have featured the EP Nick Lowe and Dave Edmunds Sing the Everly Brothers.

Although the pair had an onstage breakup in 1973 that resulted in a decade-long estrangement, Phil later said that their relationship had survived the tumultuous period despite  Don being a Democrat and Phil a Republican

The Everly Brothers - Take a Message to Mary

The Everly Brothers - Let It Be Me