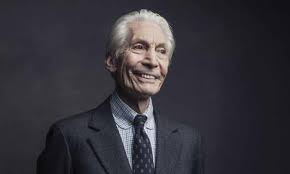 We are sadly having one of those periods where some of the icons of popular music are dropping like flies.

Nanci Griffith, Don Everly and now Charlie Watts the suit wearing, jazz loving drummer of the Rolling Stones who has sadly died a  couple of months after his 80th birthday just after pulling out of a tour due to ill health.

A quote on the BBC website from an interview Charlie gave to the San Diego Tribune in 1991 I don't know what showbiz is and I've never watched MTV. There are people who just play instruments, and I'm pleased to know that I'm one of them.

And a couple of quotes from The Guardian  firstly from Robbie Robertson Charlie’s drumming is powerful and unique. His approach is entirely his own and helped shape the sound of rock’n’roll  and Joan Jett the most elegant and dignified drummer in rock’n’roll. He played exactly what was needed – no more – no less. He is one of a kind.

And the best of them all from Charlie to Mick Jagger don't ever call me your drummer again. You're my f*cking singer

Having been behind the sticks since 1963  he was the man who kept the Glimmer Twins in check. It is very difficult to imagine the Rolling Stones without him. Maybe it is time to call it a day lads.