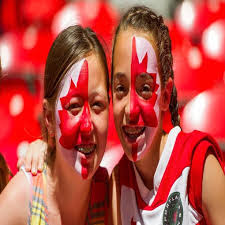 There is an impressive list of major Canadian female singers - Joni Mitchell, Alanis Morrissette, Celine Dion, Peaches, Carly Rae Jespen, Shania Twain, Sarah McLachlan and k.d.lang to name but a few
Of these only Joni and k.d have graced these pages and I would be very surprised if any of the otheres ever do.As you may expect I have gone for some more relatively obscure artists who are more in keeping with this blog.
I've had The Reminder a 2007 album by Feist for years. However she had completely slipped off my radar until she recently turned up her as part of Broken Social Scene under her full name Lesley Feist.It was good to reaquaint myself with this one
Carolyn Mark is a Canadian singer based in Chicago who has performed as part of The Corn Sisters alongside Neko Case (who many folk think is Canadian but who isn't) The song below is taken from a Bloodshot compilation Hard Headed Woman: A Celebration of Wanda Jackson.
Oh Susanna was the stage name of Massachusetts born but Vancouver raised Suzie Ungerleider. This is the title track of her 2001 album Sleepy Little Sailor on Hot Records.After years recording as Oh Susanna this year she released an album called My Name is Suzie Ungerleider.She is the only artist featured today that I have seen live.
I don't have any albums by Lindi Ortega and  don't know why that is the case. I'm pretty sure that I've had 2013's Tin Star in my hand at one stage but never pulled the trigger.
Bands of Canada next week.
Feist - Brandy Alexander
Carolyn Mark & the Room-Mates - Hot Dog, That Made Him Mad
Oh Susanna - Sleepy Little Sailor
Lindi Ortega - Gypsy Child
Posted by Charity Chic at 08:00