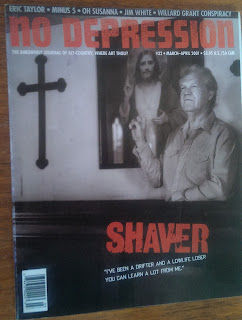 No Depression - The Bi-monthly Journal of Alt- Country
#32 - March -April 2001
For a number of years I subscribed to No Depression magazine. For this series I shall go through them chronologically with a few words and a couple of songs by the cover artist and a song from one of the other artists featured at the top of page
We start with Billy Joe Shaver a man who lost two fingers in a sawmill accident  and who taught himself how to play guitar without them.
He was on the periphary of the Outlaw movement with a number of better known artists recording his songs
With the increase in the popularity of alt-Country he enjoyed a return to the limelight  recording as Shaver from 1998 album Victory which highlighted his Christian faith followed by 1999's Electric Shaver and 2001's The Earth Rolls On which the lead article concentrates on.
During this period he lost his mother and his wife and also his song Eddie ,who featured on some of these albums, following a drug overdose.
Billy Joe had his demons  but managed to quit drink and drugs for a period  with help from his faith.
Sadly when I saw him in Glasgow's Arches a couple of years later he was totally off his face.
He died in October 2020 at the age of 81.
The other artist I have selected is the band Willard Grant Conspiracy with a song from the compilation Loose - New Sounds of the Old West -volume two. In the sleevenotes Angie Says is described as the sort of pop epic that could be described as Phil Spector meets Nick Cave at a Tindersticks show.
Shaver -When The Fallen Angels Fly
Shaver - The Earth Rolls On
Billy Joe Shaver - Old Five and Dimers Like Me
Willard Grant Conspiracy -Angie Says
Posted by Charity Chic at 08:00