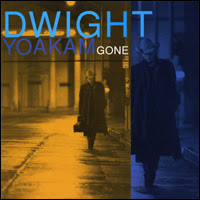 Last week I got involved in an interesting and entertaining discussion on Twitter as to the merits of various Dwight Yoakam albums.
The general consensus was that the first four albums were pretty much untouchable with an arguement for including 1993's This Time in the list of the Essential must haves. My ICA  over at JCs place confirms this school of thought.
If you don't have them  a) why not? and b) you can rectify that via the Original Album Series which I bought despite having the first four on vinyl and This Time on CD.
It was also agreed that whereas his 6th album Gone from 1995 had a few good songs that it was from here on in that things gradually when down hill, gradually at first and then with increasing speed. I persevered until 2000 but have nothing by him from there on in. The 1999 cover of Queen's Crazy Little Thing Called Love may well have been the straw that broke the camel's back
I borrowed 21st Century Hits :Best of 2000 -2012 from the record library which merely confirmed the correctness of my decision.
Here are a couple of the better tracks from Gone.
Dwight Yoakam - Sorry You Asked
Dwight Yoakam - Gone (That'll Be Me)
Posted by Charity Chic at 08:00