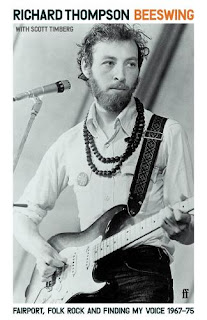 I've just finished the book Beeswing ( and not Beeswax as I inadvertantly called it before) by Richard Thomson and an excellent read it is too.
As the sub-title Fairport,Folk Rock and Finding My Voice 1967 -75 suggests it focusses on his early life and the early part of his career. Although it doesn't directly say so it also suggests that there may well be a sequel somewhere down the line.
As Waterstones put it it  vividly captures the life of one of Britain's most significant artists during a heady period of creative intensity, in a world on the cusp of change.
I have fairly recently featured Fairport Convention and one of the albums he recorded with his then wife Linda as part of a Folk Monday series.

This time round I will feature the man himself. The book includes recollections of dreams and also the lyrics of some songs which feature in the book so you are getting a couple of them.

There is also an amusing anecdote where Richard and colleagues are in an American airport where they overhear the folk in the next booth  being derogatory about the length of their hair and their dress sense. Richard recognises them as Buck Owens and his Buckaroos who he had albums by. He then goes up to them saying how he admires their work, asking for their autographs and making them feel distinctly uncomfortable!

Richard Thomson - Turning of the Tide

Buck Owens & his Buckaroos - Waitin' in Your Welfare Line