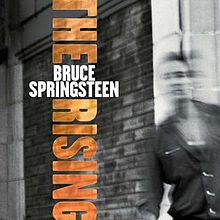 2021 Charity Shop Purchases 50 - Bruce Springsteen - The Rising
A pre-holiday visit to the charity shops in Glasgow's Shawlands district saw a couple of purchases.
One of them was, I'm afraid, was another Bruce Sprinsteen album. The Rising was bought to replace a burn only to find out when I got home that I didn't actually have it!
From 2002 on Columbia as per usual it is his 12th studio album his first studio album in 7 years (the previous one being The Ghost of Tom Joad) and the first with the E Street Band for 18 years.
I hadn't been aware up until now that it was his  response to the 9/11 attacks in 2001 although it seems than many see it as a universal anthem of resilience and hope and let's face it we could all do with some of that.
Now I need to find some space on the shelves given that it actually isn't replacing anything!
Bruce Springsteen - The Rising
Bruce Springsteen - My City of Ruins
Posted by Charity Chic at 08:00