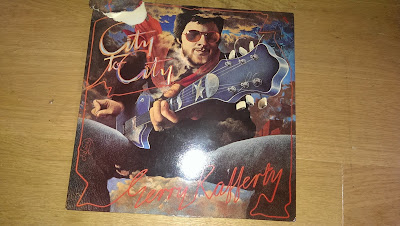 I've a Car Boot Calamity to report. No, nothing to do with Car Boot Sales .I would need to get up far to early to pick up any decent vinyl from there.

When we were away for a few days we visited a pop  up shop in Whithorn. Mrs CC came away with a painting by the proprietor and I came away with two albums in good condition for 3 quid a piece. So far so good.

When we were leaving I packed them stacked flat on top of the suitcases in the boot. However, on arriving home I was mortified to discover that City to City by Gerry Rafferty had a big chunk out of the cover as the picture above shows. Fortunately the vinyl had escaped  being damaged by literally milliemetres. It looks as though at one of the stops on the way home the car boot has been shut on it. Nobody so far has claimed responsibility.

Gerry Rafferty - Right Down the Line