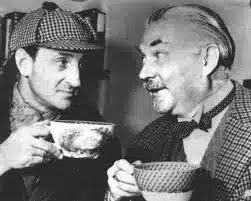 Apropos of nothing when I was watching the football the other night the phrase "elementary my dear Watson" popped into my head. This in turn led me to thinking what artists with the name Watson I had music by and whether there was a post in there somewhere. Yes, the football was that good.
It turns out that there were a few and some are featured below.
Let's start with Helen Watson with her version of the Dan Penn and Spooner Oldham classic Out of Left Field which can be found on her1997 album Somersault on Fledg'ling Records which is well worth having.
I saw Dale Watson play in a bar in Austin once. There were only about a dozen folk in the bar with about half watching him. Then an update on some development in the Gulf War came on the telly leading to everyone watching it. Dale subsequently abandoned his show.
The Watson Twins (Chandra and Leigh) are probably best known for appearing with Jenny Lewis on the Rabbit Fur Coat album. They have however recorded in their own right including this  song from their 2005 album Southern Manners
Let's go funky with Johnny "Guitar" Watson.
It's only fair that old Sherlock gets a nod as well as his sidekick Watson so we end with some Bluesy Gospel Soul courtesy of The Holmes Brothers.
Helen Watson - Out of Left Field
Dale Watson - South of Round Rock,Tx
The Watson Twins -Shoot the Lights Out
Johnny "Guitar" Watson -Ain't That a Bitch
The Holmes Brothers -You Can't Hold On to a Love That's Gone
Posted by Charity Chic at 08:00