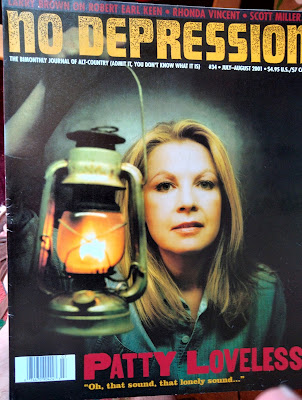 No Depression - The Bi-monthly Journal of Alt- Country
#34 -  July -August 2001
The third issue of No Depression on the shelves is the first to cause me some hard work as I know very little about Patty Loveless. I had always assumed that she was more mainstream country. This belief was reinforced as I could find nothing on the Americana shelves but a couple of tracks on the mainstream Country shelves on compilations called Women in Country and O Sister Where Art Thou.
On reading the main article Down From the Mountain her inclusion becomes clearer and the sub -title Patty Loveless ventures deep into the valley of her homegrown soul
Mountain Soul  was released in June 21 In an effort to control her own destiny, rather than be controlled by country radio, Loveless made an abrupt move away from commercial, country/pop and made a stone-cold Bluegrass album in 2001. Mountain Soul was released to numerous critical accolades and sold decently despite a lack of radio support.
It's not one that I am familiar with but the track The Boys Are Back in Town features on one of the compilations. Not to be confused with Thin Lizzy
Similarly I know very little about the other artists namechecked on the front cover namely Robert Earl Keen, Rhonda Vincent and Scott Miller. Of these the only one who rang a vague bell was Scott Miller who I have a couple of tracks by by him and his band the Commonwealth. and also stuff from the band the V-Roys of which he was a member.As a public service I acquired a copy of his 2017 album Ladies Auxiliary so named as all the musicians who accompany him are women. The things I do for you.
We are back on safer ground next time round.
Patty Loveless - The Boys Are Back in Town
Patty Loveless -Tear Stained Letter
Scott Miller -Ten Miles Down the Nine Mile Road
Posted by Charity Chic at 08:00