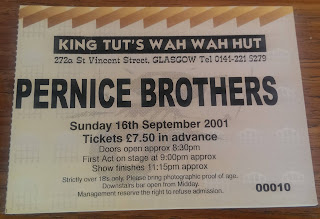 A new Saturday series where I delve into my ticket tin and randomly pick a ticket from an act seen at King Tuts. Then I will write a few words about the artist alongside anything I can recall about the concert although more often than not I suspect that will be very little.

I'm pretty sure that prior to this I had seen Joe Pernice at a gig put on by my pal Tom Hamilton who ran Death and Taxes promotions. His shows were my introduction to many an Americana act.

I'm afraid I can remember very little if anything about this concert. I suspect that I was in attendance with my pal Goggs. It looks as though I was keen to see them given the ticket is number 10 (I was obviously even keener to see the Walkabouts  ticket number 6). Joe may have been slagged off for wearing a particularly bright jumper but that may well have been one of the other times I saw them. I saw them again at King Tuts on 12th August 2003 by which time the  cost of the ticket had risen to £8.00.

From the date of the concert it looks as though they were promoting their second album The World Won't End released by Pious/Southpaw  (on license from Ashmount Records ) on June 19th 2001. The close proximity probably reflects the fact that they were one of those Americana acts who appeared to enjoy more popularity on this side of the pond than  from their homeland

I shall feature a track from that album (which has appeared here a couple of times before) and also  a couple from their 1998 debut Overcome by Happiness on Sub Pop/Rykodisc which would have featured. I recall Monkey Suit being a particular favourite of me and my pals.  A track from that album appears on a Loose compilation which describes them as Northampton, Massachusetts' answer to Teenage Fanclub.Another explanation perhaps as to why they were so popular in Glasgow.