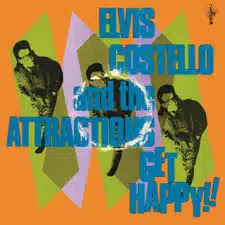 The other day while my laptop was taking an eternity to warm up I gave Get Happy!! by Elvis Costello and the Attractions its first airing in the longest while.
From 1980 on F-Beat it was Elvis' 4th album and his third with the Attractions. I think it may well have been the first of his albums that I ever bought but obviously I have long since acquired its predecessors.
It was a bit of a change in direction (the first of many) being heavily influenced by R&B,Ska and Soul.It was critically well received and if often quoted as various people's favourite Elvis album. Not me though, that would by Blood and Chocolate
It was produced by Nick Lowe with the artwork by Barney Bubbles. Unusually for the time it contained 20 tracks, 10 on each side. Somewhat confusingly the record sleeve does not match what's on the actual record as the sides are reversed so although Motel Matches is listed on the cover as being on Side 1 it is actually on Side 2 with the opposite applying to Man Called Uncle.
I'm not playing so you are getting them in the order on the cover.