Seen at King Tuts - The Walkabouts 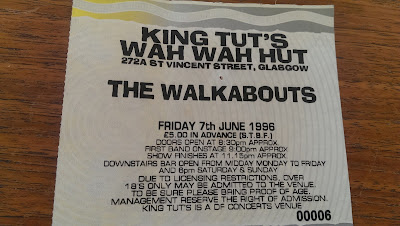 First in a new Saturday series where I delve into my ticket tin and randomly pick a ticket from an act seen at King Tuts. Then I will write a few words about the artist alongside anything I can recall about the concert although more often than not I suspect that will be very little.

The Walkabouts were an American band from Seattle who were active from 1984 - 2015 and who recorded on Subpop and Glitterhouse among other labels. The core members were vocalist Carla Torgerson and songwriter Chris Eckman. They released around about a dozen albums, for of which are on at the shelves. Two were bought at the time including Satisfied Mind, the greatest covers album, of all time and one of the 50 Americana albums you should here before you die. The other two were charity shop jobs.

I think this was probably the only time that I ever saw them live. I'm afraid that I can remember very little about the concert other than my pal Bill giving Carla a peck on the cheek at the end of the show. I also think that they may have ended the show with their cover of Charlie Rich's Feel Like Going Home

The music I've chosen is from the 1994 CD single Good Luck Morning including a great live version of Findlay's Motel  from The Paradso, Amsterdam on June 13th1993. I'm pretty sure that both of these songs would have featured on the night.

The Walkabouts - Findlay's Motel (live at the Paradiso)