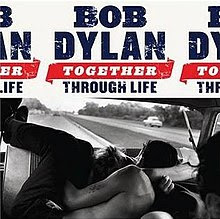 The Missing Records Haul  - Bob Dylan - Together Through Life

I can never remember which of the latter day Bob Dylan albums I actually have and which are burns. By latter day I mean Time Out of Mind (1997), "Love and Theft" (2001), Modern Times (2006) and Together Through Life (2009). I have nothing after these except Rough and Rowdy Ways.

I took a punt on Together Through Life thinking that the copy on the shelves was a burn. Fortunately I was right. Only Modern Times to go which should hopefully be easy to remember.

This one's a good one with a blues feel to it David Fricke of Rolling Stone writes Dylan, who turns 68 in May, has never sounded as ravaged, pissed off and lusty. That'll do for me.

Bob Dylan - If You Ever Go to Houston