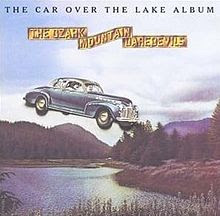 The best thing about The Ozark Mountain Daredevils is probably their name. Armed only with that you could take an educated guess that they were a  long haired Southern country rock band from the 70's

I've got the occassional song by them here and there including three copies for some strange reason of their biggest (and probably only ) hit Jackie Blue but this is the first and I suspect the last album of theirs that I have acquired.

The awfully named The Car Over the Lake Album is their third album from 1975  and is on the A&M lael the cover illustration being borrowed from a poster advertising one of their college gigs. Sadly there are no stand out tracks on the album and therefore for ease and laziness I've gone for the first track from each side.