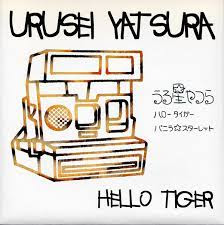 2021 Charity Shop Purchases 45  -Urusei Yatsura -Hello Tiger - CD single
On my last visit to the Oxfam music shop on Glasgow's Byres Road someone had just handed in a number of CDs by Glasgow indie band Urusei Yatsura. it seemed rude not to relieve them of a couple.
Named after a Japanese manga Urusei Yatsura were a  four piece band consisting of Fergus Lawrie, Graham Kemp, Elaine Graham and Ian Graham and were on the go from 1993 to 2001 during which they released three albums. They were championed by John Peel doing 4 Peel sessions and also a Steve Lamacq Evening session.
They were one of the many bands at the time who completely escaped my attention when I was immersed in Americana.They are also one of the many bands who I have belatedly discovered thanks to the blogging community and in this case primarily JC
Hello Tiger on the Che label was their only single to trouble the Top 40 albeit very briefly spending 1 week at number 40 in February 1998. It is also a splendid racket.
Urusei Yatsura - Hello Tiger
Urusei Yatsuri - Vanilla Starlet
Urusei Yatsuri -Vent Axial
Posted by Charity Chic at 08:00