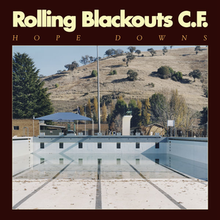 The Missing Records Haul - Rolling Blackouts C.F. - Hope Downs
I had assumed that Rolling Blackouts C.F. were an American band and the C.F. was shorthand for California. Well we all know what happens when you assume. Turns out that they are actually from Melbourne in Australia and that the proper name of the band is Rolling Blackouts Coastal Fever.
Hope Downs is their debut album from as far back as 2018 on Sub Pop (I thought it was more recent than that ) and it has subsequently been followed up by 2020's Sideways to New Italy.
Hope Downs is one of those (many) albums that I was aware of (it's hard not to) but one which I had never got round to actually listening to.Well now I have and I'm pretty impressed. The Guardian describes it as hook-laden jangling indie pushed along irresistibly by motorik rhythms.
Given that they are Australian  there are a number of comparisons by critics to The Go-Betweens and  also to The Strokes (which I can see), The Vacinnes, R.E.M. and perhaps more surprisingly The Cure
I'm happy with this purchase
Rolling Blackouts Coastal Fever - Talking Straight
Rolling Blackouts Coastal Fever - Mainland
Posted by Charity Chic at 08:00