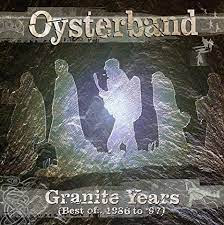 After unsuccessful charity shot forays in Ballantrae, Stranraer and Wigtown I was getting a bit twitchy by the time we visited Newton Stewart.

The Community Shop had a large collection of CDs and I was determined not to leave empty handed. That proved harder than I first thought. I eventually plumped for Granite Years a 2000 Best of  Oyersterband compilation on Cooking Vinyl.

A band that I was only aware of from a track on each of  the three Cooking Vinyl Samplers that I have from 1993 and 1994.

A quite earnest folk rock band from Canterbury who had a political outlook. The music is pleasant enough but nothing particularly stands out. They seem to me to be a somewhat nicer and gentler version of the Pogues or the Levellers who you could take home to meet your mum.

Not entirely convinced that this one is a keeper. Not necessarily because it is bad but rather because it is one that I can't really see me playing all that often.I haven't managed to get through all 30 tracks yet.

Oysterband - Another Quiet Night in England (1994)